East – A play by Daedulus 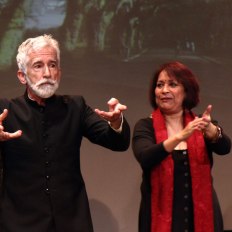 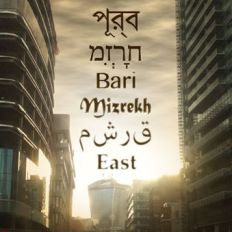 During the month of November every year, I attend out of love and duty, what I feel is one of the finest fringe theatre festivals in the UK. As a staunch supporter of local arts, I have always tried to contribute however I can in ensuring these traditions continue in our urban spaces. This festival is called The Season of Bangla Drama, spearheaded by a good friend of mine and also a fellow theatre lover Kazi Ruksana, whom without, this festival would collapse. She, with the help of the Tower Hamlets Council and all the wonderful festival volunteers and venues, leads this annual celebration from inception to delivery – and it has gone from strength to strength every year.

The festival offers a diverse range of plays with Bengali sensibilities from the UK, Bangladesh and West Bengal. It aims to explore how Bengali culture and heritage can be exported across continents and reinterpreted using a mixture of innovation and tradition to inspire a new generation and develop new audiences. The festival is also a great platform for emerging writers, directors and performers to showcase their talents. . I am asked every year to review the plays, which is both a pleasure and challenge, especially for the really good ones where I’m often lost for word and just want to say ‘incredible’!

East is a project that invited local residents to join in sharing some of the stories brought together by the East End’s rich, diverse history of immigration. Working in collaboration with storytellers Shamim Azad and Sef Townsend, and supported by local organisations Bishwo Shahitto Kendro and Daedalus Theatre Company, this project not only celebrates the cultural variety of London’s East End but also some of the many tales that people across the world have in common. It has been created in rehearsals using a mixture of the performers’ own experiences, and their memories of traditional songs and tales. Come along to hear the resulting performance, backed up with music, visuals and a taste of local food.

It begins with a wonderfully kooky song about a moose, which had the audience moving their arms in the air, giggling and making all sorts of sounds. A great icebreaker, and a warm way to begin what can only be described as a series of sweet, poignant and relevant stories.

I enjoyed the variety of ethnicities, religions and cultures that were celebrated and shared with the audience and the sheer passion for the art of story telling itself. These were all executed through stories that touched on immigration, of worship, or relationships and love, and loss and migration. The delivery for some came with nerves and it was clear to see they were still coming to grips with stage presence and projection. However, I found this somewhat enhanced the sincerity and relate-ability of some of the emotions they touched upon in their stories. I loved the use of minimal props, from a rug, to candles and a pair of bells clinking as punctuation marks during the delivery of one of the stories. The intermission came with a table full of delicious food, nuts, raisins and drinks from the communities that were represented in the play. This was an unexpected treat and really did continue the engagement between the cast and the audience.

What I could not help but notice, was that the Bangladeshi man portrayed throughout the play was a little on the negative side…. either a cheat (on his English wife), a ship staff who escaped in a copper pot and through a new forged identity, made his home and fortune, etc etc… which made me chuckle but I think in future, it would be great to see some more positive representations of the Bangladeshi community in these tales. However, that aside, it was a real joy watching so many stereotypes of community relations and cultures, challenged in the most subtle and poetic way.

With the collaboration only being 9 months old (as pointed out by one of the actors at the end of the play), it is hard for me to be over critical. With time, I think the  things I felt were little glitches –  like the projection of actors voices, seamless movement between each tale and length (I felt it was far too long), will be addressed and improved over the months to come and with a little fine tuning that comes with lots of repeat shows. What I saw on friday night was incredibly encouraging and I can only see this group go from strength to strength in the years and plays to come –  and wish them all the best.

East is funded by Arts Council England with support from Apples and Snakes. It was initially developed at Rich Mix, with additional funding from Queen Elizabeth Olympic Park.

Daedalus Theatre Company is professional theatre group based in East London that specialises in devised, documentary theatre and often works outside of arts venues, performing in places like Southwark Cathedral and Amnesty International UK’s Human Rights Resource Centre. Bishwo Shahitto Kendro (BSK) or World Literature Centre, is a community-based arts organisation in East London, which organises a wide range of events, including the Boi-Lit festival.