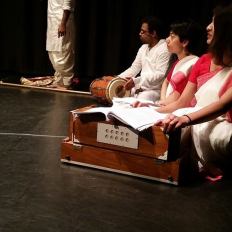 During the month of November every year, I attend out of love and duty, what I feel is one of the finest fringe theatre festivals in the UK. As a staunch supporter of local arts, I have always tried to contribute however I can in ensuring these traditions continue in our urban spaces. This festival is called The Season of Bangla Drama, spearheaded by a good friend of mine and also a fellow theatre lover Kazi Ruksana, whom without, this festival would collapse. She, with the help of the Tower Hamlets Council and all the wonderful festival volunteers and venues, leads this annual celebration from inception to delivery – and it has gone from strength to strength every year.

The festival offers a diverse range of plays with Bengali sensibilities from the UK, Bangladesh and West Bengal. It aims to explore how Bengali culture and heritage can be exported across continents and reinterpreted using a mixture of innovation and tradition to inspire a new generation and develop new audiences. The festival is also a great platform for emerging writers, directors and performers to showcase their talents. . I am asked every year to review the plays, which is both a pleasure and challenge, especially for the really good ones where I’m often lost for word and just want to say ‘incredible’!

Last night (10th of November 2014) I had the pleasure of watching Mukul & Ghetto Tigers’ wonderful bi-lingual adaptation of Romeo & Juliet.

It’s often exciting to watch a story you already know being delivered in a new light. I have seen over eight adaptations of this tale in theatres up and down the country over the last decade or so. This by far has to be my favourite.

I loved the simplicity of the stage and lights. The minimal props. There was a wonderful feng shui on the stage, with the cast using the full space, and their bold white costumes punctuated with red was symbolic even if it wasn’t intended to be.

The theatre was full, every seat filled and eager to see how this was going to work. Bi-lingual adaptations can go awfully wrong if the entire audience is not familiar with both languages… but in this case, it was strength for this play. The seamless marriage of both languages was delightful to watch as it became almost like oral courtship that ended in a tragic silence.

Suzanne Kendall, who played Juliet, was not the delicate whimsical Juliet’s I have seen in the past. She had amazing stage presence, and was playful, relatable, expressive on her face in a way that reminded me of the dancers in Kerala –  and her projection of sorrow almost brought me to tears. This coupled with Delwar Hossain Dilu’s strong delivery of Romeo, with his strong stride and spontaneous outbursts into bangla love songs which were delivered with such passion and gusto, created the perfect harmony between the classic narrative, the adaption, and the audience’s perception of all the nuances that come with the early courtship stage.

Rez, an incredibly talented actor I have admired for a very long time, really held this piece in a way I feel hugely contributed to the reason why I have been so moved by this adaption. His versatility was poignant – from the clapping entertainer dancing in the beginning to the storyteller’s dream in jumping seamlessly between roles from Tibalt to the father to the priest. His ability to ensure each role was distinct and delivered with as much enthusiasm as the other, was a backbone for the entire piece. A real talent!

And finally, the best nurse I have seen in all the adaption’s I have seen, played by the gifted Francis Woolf. His light-footed natural take on this role was incredible. I have not connected to Shakespeare’s nurse in the way I did to Francis’s adaption. The nurse brought to the story a warmth that captured the spirit of the human essence, of love, compassion, loyalty and support, and Francis was able to amalgamate all of it with such ease. I was laughing all through his parts.

Actors have always been instrumental in theatre, but often there are other details that can bring a degree of poignancy to the piece that no line or acting can. In this case, it was the delicate yet powerful songs and harmonies by Tanusree Guha and the Reya Sharmin who were the musical spine of this piece. Their voices were infectious and captivated the audience, I could see others also looking at them with awe like I was. The sound of Tanusree’s humming and singing as some of the more painful scenes of loss were being delivered projected the emotions in ways words often cannot. Reya’s singing during delightful scenes of love reminded me of watching old bangle films with my parents as a child and listening to my mother hum them later in the day…. nostalgic, whimsical and timeless. And the song from the film Monpura at the end broke my heart. I laughed, cried and connected…. and it would not have been possible without Reya and Tanusree’s part in this play.

It’s not often I find myself searching aimlessly for something to suggest for future performances, or a little ‘productive’ criticism, or something I don’t like, because there is ‘always room for improvement’. But in this case, I admit defeat. The play was a flawless delivery and dance of languages, love and of loss and societal pressures, and a sensorial delight. And I think I just fell in love with this classic all over again.

A huge warm congratulations to Mukul for giving us a play which reaches beyond what Shakespeare wrote,  and transforms it into a new timeless ode to love and loss.